The SaaS Academy playbooks have helped these SaaS companies to scale

Let us help you install the A.C.E Growth Engine™ that help you attract qualified leads, convert them to MRR and predictably scale your SaaS

Take 26 seconds to fill in the form, then schedule a FREE Growth Session with our SaaS Scale specialists to see if we're a good ﬁt to work together and help you grow. 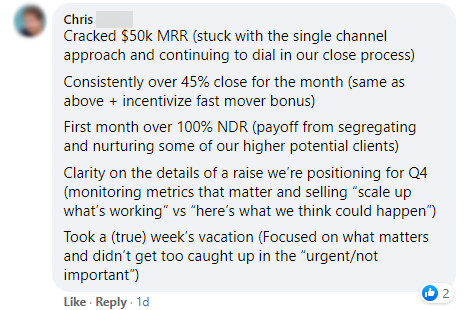 Let us help you install the A.C.E Growth Engine™ that help you attract qualified leads, convert them to MRR and predictably scale your SaaS

Take 26 seconds to fill in the form, then schedule a FREE Growth Session with our SaaS Scale specialists to see if we're a good ﬁt to work together and help you grow.

The SaaS Academy Is Perfect For You If You Have ...

The SaaS Academy Is Not For ...

Go “all in” on growing your SaaS Business!
If you’ve achieved initial traction, I can help you scale-up to record-breaking MRR faster.

In 2020, my team and I helped 500+ ambitious SaaS Founders achieve critical growth and...

During the Growth Session we will:

In the past year, I've coached over 500+ elite software founders to help them raise capital, scale or exit their companies
Here's what some of my coaching clients had to say...

Matt grew revenue by 250% and doubled his team

“Other SaaS founders should join SaaS Academy if they’re looking for systems to plug into that you know will work and if they’re looking for a really supportive community of other people who are on the same journey. The group of other founders that I’ve met at SaaS Academy has turned into partnership opportunities, it’s into collaborative discussions, it’s turned into people who are running businesses 10 times as large as mine that are amazing sounding boards for what’s worked for them and what hasn’t.”

“I’ve been in SaaS Academy for eight months now and in just that short time, working with Dan and the whole team here at SaaS Academy, my business has literally tripled. We’ve added 12 employees, and I really couldn’t do it without Dan’s support and everyone here in this room.”

Trevor added over half a million in new ARR

"Over the 14 months we've worked with Dan, we've added over half a million in new ARR. That would not have happened without Dan's strategies and coaching."

"Dan has helped us scale 8x by telling us what to focus our time on. Coaching with Dan had a 4x ROI in less than 2 months! We reduced our churn by 38% by implementing Dan's Customer Success Planner™ process."

"We finally transitioning from Founder-led sales to Scaled-selling...and victory! Our sales rep closed her first deal ($18k ARR) within 2 weeks and I had ZERO involvement. Getting coached by Dan and being part of SaaS Academy is what made it all come together!"

“Since the last SaaS Academy, or really since joining, we came into this with, I think, we were at six or seven employees, now we’re at 12, we’re going to be hiring three or four. The company month over month is growing between 10% and 20% and that’s MRR growth, then we have one time revenue that’s growing. And so, all in all, we just see this nice chart going up, which is exciting because now there’s momentum with the team. There’s momentum with me, there’s momentum with all these new people that we’re bringing into it. And it’s allowed us to take a little bit more risk versus we’re flat. We don’t know where we’re going and it’s been great.”

“And I would say, it easily has allowed us to get to where we are today, which I’d say probably without SaaS Academy, we’d be a number of months behind which in this particular growth pattern we’re in, it would be significant. So, I think it probably easily added 20 to 30% of our success. And I mean, the return on investment for it, we’ve easily made 10x what we’ve invested, and we’ve only really been in the program since earlier this year. So, we’re like nine months in and already have a significant appreciation and implementation that shows that we really feel good about the investment.”

“When we joined, we were at about 150K MRR, we’re about to hit 200K MRR. I’ve been in a part of this for what, less than four months. So that’s pretty significant growth just in the last few months of being part of this. I can definitely attribute some of the partnership calls that I’ve had already, and just the way I navigate the last call that helped us really land the biggest partnership to date, I talked differently than I would have, and that was based on training. “

Adrian nearly doubled his ARR to $2 million in 1 year

Some of our Coaching Clients

What are you waiting for?

Schedule a time now to jump on a risk-free Growth Session with one of my Scale Specialists.

In just 45 minutes, we will help you get clear on the exact challenges you need to overcome to optimize your company's growth this year.

If you’re a great ﬁt for one of our exclusive closed-door programs, we will invite you to explore one that is perfect for you and your SaaS businesses to help you take it to the next level.